Kra Canal project, for the time being, is shelved or so it seems, with the Land Bridge project to connect the Andaman Sea and Gulf of Siam being rolled out. Thailand Ministry of Transport still cherishes the idea as a part of the Southern Economic Corridor Project. Provinces homing relevant ports and Kra Isthmus land links connecting these ports are also enthusiastic. Chumphon Province along the Gulf of Siam coast, and Ranong Province on the other side of the Isthmus, will benefit greatly from Land Bridge if it materializes and lives up to cargo volumes expectations.
Links to connect 2 ports aren’t restricted to highways and railways, understood project implies the construction of the pipeline, because the project suggests oil transportation as well – and in big volumes.

The Chumphon-Ranong land bridge project will serve as a link for the transport of oil from the Strait of Hormuz, more than 4,000 kilometers away from the Andaman Sea, to a port in Ranong before it is transported by land to a port in Chumphon, where it will be shipped to other countries in the region, including China, Japan, and South Korea, Transport Minister Saksayam Chidchob said.
Oil, indeed, is supposed to constitute the major part of cargo volumes to flow through Land Bridge, so crude oil tankers are to become the main type of ships to call Bridge ports.

A number of respective studies have been already carried out, and more are to come before final plans will be outlined, and final decisions will be made. Thailand is pursuing its’ long-time ambition of becoming an intercontinental shipment and cargo exchange gateway, one of the leading ASEAN transportation hubs. A Committee was appointed in July, to facilitate the shaping of the project.

Land Bridge Project is much less ambitious and therefore, much more realistic, but even this, comparatively moderate project, might be nothing more than wishful thinking, giving the present situation, both on global and national levels, either economical or political. The world economy is on the brink of collapse and it will collapse, or fall into the deepest crisis in known mankind’s history – this is absolutely obvious for anyone not blinded by mainstream narrative and limitless as well as groundless, i.e. stupid, optimism. That is to say, relative to the issue in question, that there are no excessive cargo volumes ahead, which may demand new waterways and new tonnage. On the contrary, cargo volumes are already on the decline, and most likely, will dramatically plummet, in the very near future. There won’t be much demand, if any at all, for the Land Bridge transportation option.

If taking a look at the situation in Thailand, one may find it as being still better than in many countries around the world, but the pandemic insanity is gathering momentum, it’s already a national threat, in any given country with very rare exceptions. I won’t go into details of astoundingly, the glaringly obvious statistical and factual falsehood of fear-mongering “Delta variant wave” (or third wave – “health authorities” got lost in pandemic waves counting) campaign, raging presently in Thailand, with tens of thousands daily “cases” found by so-called “medics”. I can only say, that the nation’s “health authorities”, drunk on power, and “democratic opposition” (remarkably ignorant and biased) to “junta regime”, obliterate – there is no other word for it – any hopes for economy and social recovery, as long as they enjoy that much power, and impunity. 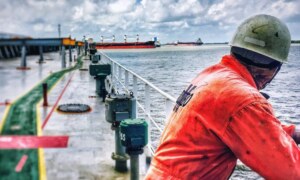 What is the Seafarers Meaning