Pending a compensation payment of 900 million dollars. Ever Given must be pay? 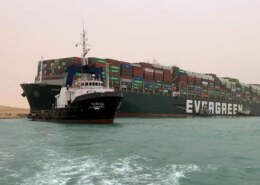 Participate in Poll, Choose Your Answer.

After days of speculation now it has come to the forefront that the Suez Canal Authorities have seized the Ever Given ship over compensation issue. “Egypt has formally arrested MV Ever Given container ship with a court order (issued by the Court of Ismailia City), pending a compensation payment of 900 million dollars,” said MedWave Shipping Agency Libya.

While the reports of the arrest couldn’t be verified but it has been confirmed by several reports that the ship has been seized. Commenting on this new development, the National Shipping Board member Capt Sanjay Prashar said that there was no official confirmation regarding this but the crew is likely to be detained for a long haul.

This means trouble for the ship and its crew as they can’t leave Egypt until the compensation is paid. Earlier, the Suez Canal Authorities claimed 1$ billion for the transit revenue loss and the cost of refloating the grounded ship. They have asked for the compensation amount from the Japanese shipping company that owned the vessel or other parties associated with it.

15 days have passed since the investigation started on the ship anchored at the Great Bitter Lake, outside the Canal. 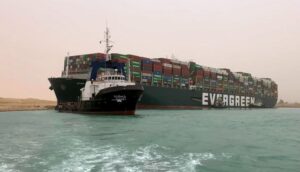